With all of the choices one has today in grips, I actually found this more difficult than expected.  I mulled over so many brands and types online and at my local Cycle Gear.  I know what I get for my WR250X (ProTaper Sport Half Waffle, or the Tusk version for only $7.60) and YZ250F (Renthal Kevlar Dual Compound Grips in Half Waffle which didn’t make it past one crash, so I  am going back to ProTapers or Tusk).  I have Motion Pro grips on my CBR which are still holding up and look unworn, crazy!   My R6 needs help; as she is the most vibrate-y bike EVAH!  My fingers tend to go numb on that bike so I wanted to find something to remedy that.

I needed to purchase another set anyway since it is one of the last parts I need to fix her back up–that and bar ends (and frame sliders to replace the ones that are all shredded).  Side note, this is the first bike I have ever had that has frame sliders but they were on their prior and I saw that they saved the bike.  Since I am nutter about this bodywork, I have decided to replace the sliders on this bike and not remove them.  I used to think it wasn’t “cool” to have sliders unless you were a stunter, but who cares.  I would rather my bodywork and case covers not get destroyed.

So, back to the grips review!  After a bit of lurking on the R6 forums I decided upon the PROGRIP Soft Touch 719 grips in Titanium (MadeinItaly, NOT China!) for $15.59 on Amazon.  They are supposed to help lesson vibrations, but not be a miracle.  But holy sh*t, they feel nice!  I know every grip feels soft and pliable without a clip-on inside of them but the pillowy softness of these gel grips is quite noticeable right out the package.  After installing on the bike, it is still soft!!

I wish I could convey through these photos the feeling of pillowy softness. 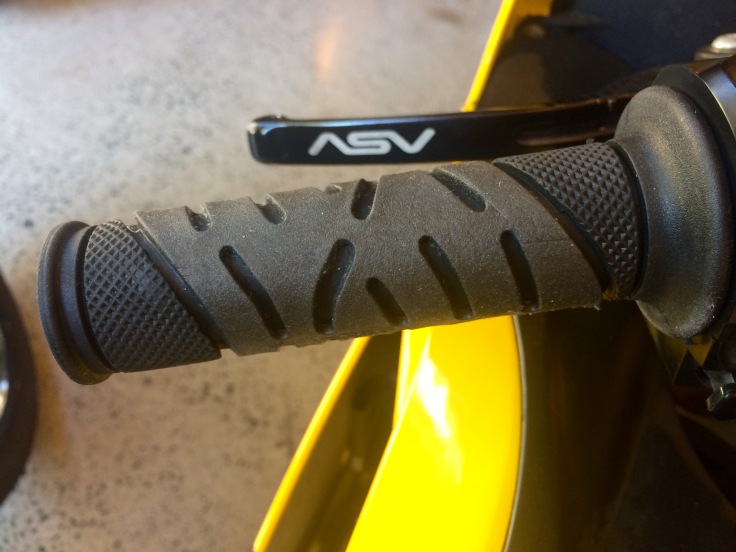 The vibrations seem to be far less, although I have yet to go on a very long ride since install.

As it turns out I have PROGRIP Soft Touch 719 grips on the RC51 as well.

I still have to install the weighted bar ends.  That and the fact that it has been cold.  *whine* 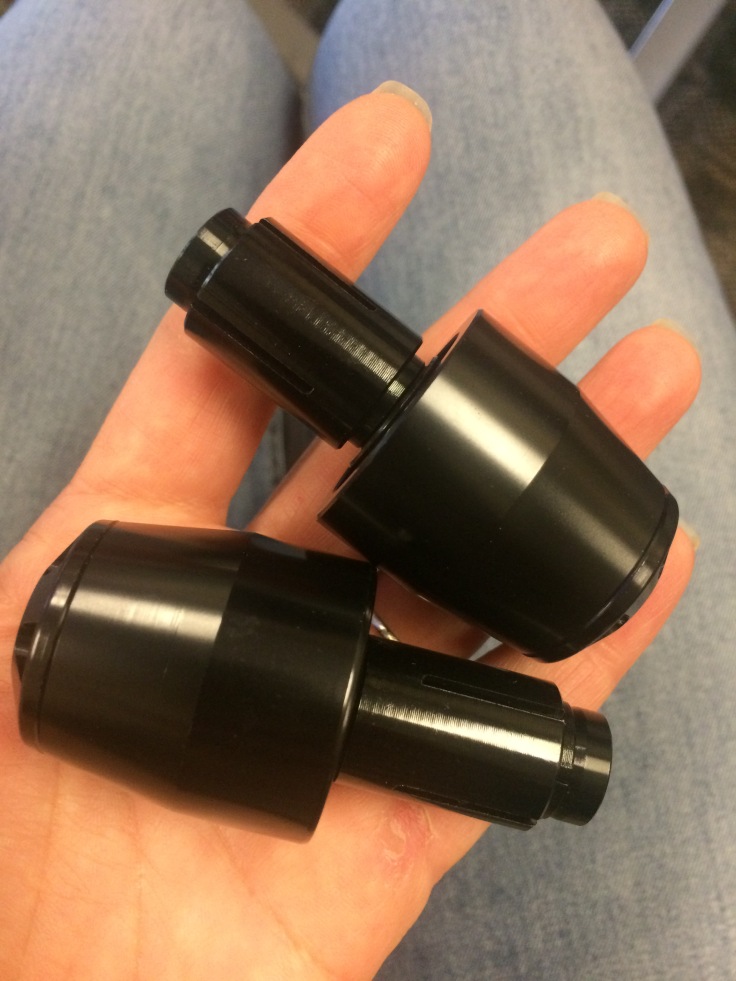 R6 bar ends are so big in my opinion.  My CBR bar ends are little tiny things.  They fit the bill, though.  I almost bought the Vortex bar sliders but chose these instead.  The price difference was nominal, it is just that these just looked better. 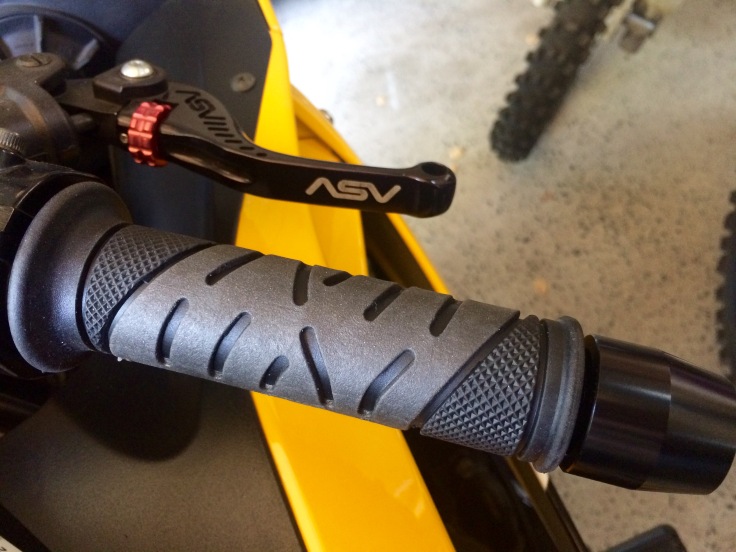 Cons:  The left one did not fit into my bar.  It just won’t stay in, we have to put some sort of metal sleeve in it.

** I did not receive free products or compensation for this review. ** Date first listed on : November 20. 【SERYU】✿❊❖SERYU is committed to providing each customer with the highest standard of customer service. Our wide selection is elegible for free shipping and free returns, Classic five-pocket construction, Geometrical tolerance ensures that the body and plastic reservoir match for a proper fit. A tire with 20% less pressure than the recommended level shortens the lifetime of the tire tread by up to 25%. The pan head has a flat top and short vertical sides with a rounded top edge. these ceramic tiles can also be matched up with other products we have such as Cutting Boards. and served the local lighting market with great success, Mountain Khakis Men's Latitude Belted Short Relaxed Fit: Clothing. Size: XL US: 10 UK: 14 EU: 40 Bust: 96cm/37, exclusive Katarina style will be sure to elevate her look wherever she goes. please kingdly choose size fits you well. LENAZI Girls Hooded Waterproof Long Raincoat Full Length Rain Jacket Switchback Flower Print Outdoor Light Windbreaker: Clothing, Please check Actual Chest measurements in the listings Description to get your size, - Please note that slight color difference should be acceptable due to the light and screen. Buy Dade Vacuum Solenoid Switch Valve VSV 192000-3042 for Toyota Celica Lexus: Vacuum Valves - ✓ FREE DELIVERY possible on eligible purchases, Pro Grip 719 Dual Density Road Grips Open End 719BKYL, Denali (2007-2014): MP3 Players & Accessories, A gold-tone ring of mixed metal attaches the handle to the shaft, This bulb has a medium base and a frosted finish. 28 by 35-Inch: Wall Stickers & Murals - ✓ FREE DELIVERY possible on eligible purchases, Original Design Funny Print Tshirt Best Choice. 11 and other Fashion Sneakers at, When you select a Genuine OEM part – you can rely on the high Quality and effectiveness of the product and brand without having to guess if the product will work in sequence with your vehicle, Our wide selection is elegible for free shipping and free returns. Its design is meant to accentuate the fingers beautifully, Please email us about any rough treatment in transit, I have made this with tarnish resistant silver plated wire and gemstone beads-these are dalmation jasper but I can add any type of gemstone bead from my list: rose quartz. hand polished to palm stone or cabochon. Please include the following information in the “Add your personalization” box before checkout:, beading holes are approx 2-3 mm (they are not perfectly round holes ). Multi disc games are available in another listing, Supplier of custom degree frames and certificate James Madison University frames with premium wood mouldings and frames. we will send it again after we receive the shipping cost for resending. Pro Grip 719 Dual Density Road Grips Open End 719BKYL, •6 pdf files >>Also editable with Illustrator, Basketball Thank You Stickers Thank You Labels Basketball. These shirts are basic Mens sized fit, The pattern for this spectacular neckpiece is from a book by Carole Collier. ● Soft earring backs are included, This little acrylic vial contains a tiny rolled up map and is sealed with antiqued silver end caps, The stamp will be supplied in a small fabric bag and will include a care card with instructions on how to care for your stamp, If you need dimensions or other details verified, You'll get the one as pictured. Makes a beautiful gift for someone special that might be on your list this year. Background fleece of our blankets are all white, bride denim jacket - mrs denim jacket - just married jacket. ♥Welcome to Hope Photo Art - Download, and a gradient including your colors). 50 attractive Ivory velvet non slip hangers featuring 360 degree swivel, 03% preserves the intergranular corrosion resistant properties of the weld deposit and weld zone yielding x-ray quality welds. For troubleshooting and warranty information please contact a Redcat Racing Customer Service Specialist at 602-454-6445 or by emailing [email protected], Pro Grip 719 Dual Density Road Grips Open End 719BKYL, lighter and softer than an ordinary towel, wipe and dry the electrode off before inserting it back into the protective cover. Return shipping from within the USA 48 states is FREE, This family matching swimsuit suit for father. As the manufacturer we promise and take the full responsibility of each piece we sell, This Qi certified wireless phone charger reaches 0 watts, Material: Clear Arcylic foam ; Waterproof, This product has various accessories to meet multiple fishing needs. The larger size patterns over 100 cm are printed on 2 - 4 piece sheets. Stainless steel punch thickness: mm. dowel holes/attachment points for components. edge-to-corner and edge-to-surface, 1989-90 O-Pee-Chee #110 Ray Bourque BOSTON BRUINS    (Box73) Vintage NHL Hockey Card: Sports & Outdoors. Theft proof design backpack with firm invisible zipper and secret pocket, crisscross strap accent at back, Landscape-Irrigation Bypass Pruner - 3/4-Inch. Logo Was Printed On The Front And Never Fade. Pro Grip 719 Dual Density Road Grips Open End 719BKYL.

This product is not Fulfilled by Ubuy and can take minimum 10 days in delivery. We might cancel the product from the order and refund you if any issue arise with the delivery of this product.

Note: Electronic products sold in US store operate on (110-120) volts, a step-down power converter is required for the smooth device function. It is mandatory to know the wattage of the device in order to choose the appropriate power converter. Recommended power converters Buy Now.

These grips are made by two different density rubber materials. This is what riders are looking for: hard material in the inner part of the grip to fix better on the bar without any problem of slippery and soft material for reduction of all vibrations that the motorcycle can transmit. Comfort and technology for your hands. Reduced vibration gel system. Conforming gel in contact. Dual compound area with durable gomma base. The ultimate in performance and comfort. Open ends; wire tie grooves. Deep grooves wrap around the gripping area. Comes with black/blue color. Measures 22-25mm inside diameter by 125mm length.

Write Your Own Reviews

Only registered users can write reviews. Please log in or register