UC Santa Barbara Distinguished Professor Glenn Fredrickson is among the 150 new members worldwide elected to the National Academy of Sciences (NAS) for 2021.

Fredrickson is a Senior Participant in the BioPACIFIC MIP at UCSB in the area of multiscale modeling and computation.

Glenn H. Fredrickson obtained his B.S. at the University of Florida in 1980 and M.S. and Ph.D. degrees at Stanford University in 1981/1984, all in Chemical Engineering. He subsequently joined AT&T Bell Laboratories where he was named Distinguished Member of the Technical Staff in 1989. In 1990 Glenn moved to the University of California at Santa Barbara (UCSB), joining the faculties of the Chemical Engineering and Materials Departments. He served as Chair of Chemical Engineering from 1998 to 2001 and in 2001 founded the Mitsubishi Chemical Center for Advanced Materials (MC-CAM). Glenn is presently MC-CAM Director and Director of UCSB’s Complex Fluids Design Consortium. He has over 340 refereed publications, one book, and more than 15 patents in fundamental and applied topics related to the statistical mechanics of soft nanostructured materials, including polymers, colloids, and glasses. Recent honors include the Polymer Physics Prize of the American Physical Society, the Walker Award of the American Institute of Chemical Engineers, the Materials Theory Award of the Materials Research Society, and election to the American Academy of Arts & Sciences and the National Academy of Engineering USA.

Glenn has consulted for a broad range of companies in areas related to chemical and soft materials science and technology. Since 2001, he has held various advisory and management positions with Mitsubishi Chemical Holdings Corporation (MCHC) and its subsidiaries. During the period 2001-2014, he was Corporate Science and Technology Advisor for Mitsubishi Chemical, Rayon, and Plastics. From 2009-2014, Glenn served as Executive Director and Member of the Board of The KAITEKI Institute, a long-term strategy unit of MCHC. In 2014 he was appointed Member of the Board, Chief Technology Officer and Managing Corporate Executive Officer of Mitsubishi Chemical Holdings, supervising MCHC's R&D Strategy Office. He continues to serve on MCHC's Board. 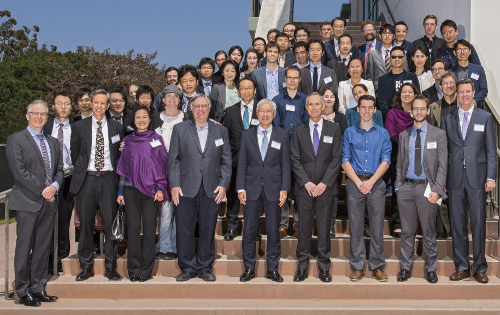 The Mitsubishi Chemical Center for Advanced Materials (MC-CAM) at UCSB has been extended for an additional 4-year term, from September 1, 2018 through August 31, 2022. The renewal will continue the successful research alliance between UCSB and Mitsubishi Chemical through 21 years of partnership. Under the terms of the renewal agreement, Mitsubishi Chemical will invest at least $8.0M in UCSB, including a fund of $400,000 to continue endowed graduate student fellowships in the departments of Materials and Chemical Engineering.

The Mitsubishi Chemical Center for Advanced Materials (MC-CAM) is an interdisciplinary materials research center that commenced operations in May 2001 at the University of California, Santa Barbara (UCSB). The Center enables a research partnership between the Mitsubishi Chemical Corporation (MCC) and the greater materials science community housed in UCSB’s College of Engineering and physical science departments. This partnership specifically targets the area of functional soft materials and has put into place MCC-funded research projects in this area on the UCSB campus. MC-CAM projects are selected and shaped by a Steering Committee consisting of an equal number of representatives from MCC and UCSB. Project selection is based on the criteria of novelty, relevance to MCC technologies and business goals, and scientific merits. The scientific programs are covered by an intellectual property agreement that provides licensing terms to MCC aligned with its business interests, and that are consistent with the mission of the University of California.

The Film and Media Studies department at UCSB is one of the top theory based schools in the nation, but the emphasis on theory is often insufficient for students who are curious about production. Student based clubs, organizations, and festivals have been formed on campus to encourage students to experiment with the process of production, yet few are able to go beyond the scope of the university's limits. CamCon's goal is to provide technical training to these student cinematographers by exposing them to the tools and techniques of the trade.

CamCon is a three day event held every spring with workshops, seminars, and demonstrations that help interested students grow as cinematographers. The event is organized by students, with the seminars and workshops taught by industry professionals. Each of the three days consist of both large group seminars and small hands-on practicums where crews can apply what they have learned. In the past, practicum exercises have included lighting at night, shooting moving actors and the art of camera movement. CamCon is designed to allow students to develop over the three days, by building knowledge and assurance from workshop to workshop.

Students interested in attending CamCon each year are encouraged to fill out the application form sent via the UCSB Film and Media Studies email listserv and posted on the site.

The Mitsubishi Chemical Center for Advanced Materials (MC-CAM) is an interdisciplinary materials research center that commenced operations in May 2001 at the University of California, Santa Barbara (UCSB). The Center enables a research partnership between the Mitsubishi Chemical Corporation (MCC) and the greater materials science community housed in UCSB's College of Engineering and physical science departments. This partnership specifically targets the area of functional soft materials and has put into place MCC-funded research projects in this area on the UCSB campus. MC-CAM projects are selected and shaped by a Steering Committee consisting of an equal number of representatives from MCC and UCSB. Project selection is based on the criteria of novelty, relevance to MCC technologies and business goals, and scientific merits. The scientific programs are covered by an intellectual property agreement that provides licensing terms to MCC aligned with its business interests, and that are consistent with the mission of the University of California.

MC-CAM is a Center housed within the College of Engineering at UCSB. MC-CAM is administratively and physically linked with the Materials Research Laboratory (MRL) at UCSB. This connection enables MC-CAM to leverage the physical plant, professional staff, and research facilities and equipment of the MRL, while maintaining its own autonomous research programs. In return, the MRL benefits from MC-CAM annual contributions to enlarge the research equipment base available to both centers, as well as through expanded research and outreach opportunities provided to current MRL participants.

MC-CAM's scope of activities and strategic focus are determined by the MC-CAM Governing Board.

MC-CAM projects are shaped and selected for funding by the MC-CAM Steering Committee.

What Activities does MC-CAM Support?

New Research Themes ("NRTs"). NRTs are small scientific projects involving one or more UCSB faculty. These projects are designed to explore the potential, by explicit realization or by gathering peripheral evidence, of a novel idea with relevance to MCC. NRTs are funded for 1 year, typically in the range of $50,000 - $100,000. Funding can be extended for a second year if the research results are sufficiently promising at the end of year one. Particularly successful NRTs can also be expanded into Integrated Research Projects ("IRPs") in subsequent funding cycles. Currently, only NRTs are being solicited for funding. NRT proposals will be accepted at any time, but will be considered by the Steering Committee for funding at four time points: March 1, June 1, September 1, and December 1. These dates will also serve as canonical starting dates for NRTs. For more information on submitting an NRT proposal to MC-CAM, see the NRT Request for Proposalsdocument. Ideally, NRTs should address MCC R&D targets listed below.

Large scientific Integrated Research Projects ("IRPs"). IRPs are typically interdisciplinary and involve 3-5 UCSB faculty and one or more MCC collaborators. Projects have a duration of 2-3 years and receive annual funding in the range of $150,000 - $500,000. IRPs will be selected based on a perceived high potential for producing valuable scientific and technological innovations, and may use the scope of existing New Research Themes ("NRTs") as a starting point for the research plan. The specific plan for each IRP will be defined by in-depth discussions between MCC researchers and UCSB participants.

Faculty, Student, and Researcher Exchange. MC-CAM will reserve funds to support the travel expenses of UCSB faculty, students, and researchers to MCC sites to facilitate the programs of the Center. Visits of MCC scientists to UCSB, hosted either by MC-CAM or individual faculty laboratories, will also be encouraged.

Annual Program Review. In order to monitor ongoing NRTs and IRPs, as well as to facilitate dissemination of research results to MCC, MC-CAM will host an annual program review each Spring to showcase research progress and accomplishments during the previous 12 month period. The Steering Committee will also provide feedback and direction at this time to ongoing projects.

What Research Topics Will be Emphasized?

MC-CAM will strive to sponsor New Research Themes and Integrated Research Projects that best meet the scientific/engineering interests and objectives of the UCSB faculty, the educational mission of the university, and the business interests of MCC. A special focus will be on materials, devices, and fabrication technologies relevant to the electronics and optoelectronics industries. Examples of project areas include:

Questions regarding the suitability of a research idea for an MC-CAM NRT should be addressed to MC-CAM Director Glenn Fredrickson.

Sours: http://www.mc-cam.ucsb.edu/about
We asked: How does it feel to be on campus?