In the United States, pasta is one of the most popular comfort foods around. While most humans enjoy feasting on a hearty bowl of pasta, you may be wondering if it’s safe to share a bite with your kitty.

So can cats eat pasta? The short answer is yes, pasta can be safe for your cat to eat. Well, as long as you take into account a few simple safety steps. And first among those, of course, is to ask your vet before feeding your cat any human foods.

Let’s look into how pasta can be okay for cats to eat and how you can safely serve pasta to your favorite feline.

Is Pasta Safe For Cats? Pasta is safe for cats to eat — at least if it’s served on its own.

The basic ingredients of flour, water, and eggs are usually okay for cats. Although they aren’t necessary for a cat’s diet and don’t offer a ton in the way of nutrition, these core ingredients shouldn’t cause any major health issues in moderation for most cats.

Pasta isn’t necessarily good for your cat, but it shouldn’t be that bad for them either if they snag a small bite once in a while.

But you do need to be wary of any pastas that are coated with sauce or that might have extra fillings inside, as these additional ingredients might include things like garlic and onions and spices that are toxic to cats.

What Are The Problems With Cats Eating Pasta? The main issue with cats feasting on pasta is that they are obligate carnivores. This means that your average feline needs to get most of their food nutrition from protein.

Pasta is a carbohydrate, which means it offers little nutritional value to a feline.

Eating a lot of pasta could result in your cat gaining weight. It could also contribute to issues with going potty if there are problems digesting it.

How Can I Safely Feed Pasta To My Cat? As always, you must ask your vet first before sharing any human foods with your feline.

Keep it simple if you’re considering feeding pasta to your cat once you get the okay from your vet. Make sure you’re only feeding the actual pasta and not any additional sauces or spices that might be harmful or even poisonous to your kitty.

Start with a small bite and see how your cat reacts. If they show signs of any digestion issues or health problems, do not give your cat any more pasta.

Also, always serve pasta in moderation and definitely not regularly or as the main part of your feline’s diet. A small bite or two once in a while should be just fine.

Does your cat love to sneak a bite of your pasta? Are there any other human foods your kitty likes? Tell us all about it in the comments section below!

Of course, the delicious noodles have always been praised for their taste. But one other aspect that receives attention is that of thoughtful package design. Those familiar with these cup noodles will be aware of the little plastic sticker at the bottom.

This sticker is used to seal the paper lid while the noodles are getting ready after pouring in hot water.

This unique sticker, which was very convenient, was loved by everyone. However, Nissin has brought about a major change to this packaging. Instead of the sticker on the bottom, there is now a W-shaped tab that can be folded down the edges of the cup.

The double flaps secure the lid in two places and is just as effective as the previous system.

In fact, this change was brought about after considering environmental impacts of plastic.

A seemingly small change is indeed an improvement that can make a huge contribution to protecting the environment. According to Nissin, eliminating this plastic sticker from the packaging will reduce bout 33 tons of plastic every year.

In addition, since 2019, Nissin started using the Biomass ECO Cup to hold the noodles, which has an even lower environmental impact and can be treated as combustible paper.

Once you open the lid, you can see a cute cat and the two flaps turn into a cat’s ears. The expressions of cats varies for different flavors.

This change will be first rolled out for the original flavors followed by others. If you visit a supermarket or convenience store, keep an eye out for this new packaging.

Hopefully many more companies will start making such changes to bring about a reduction in plastic use.

Let us know if there is something that needs to be fixed: Feedback Form

A globetrotting cat has clocked up 50,000 miles by travelling Europe in his owners' camper van.

The black cat named Noodles has been travelling with Alex, 71, and Robert Crosland, 72, since the couple retired and bought a motor home seven years ago.

In September the trio set off on their current 5,000 mile trip, through France and Spain, and are set to return home to Bingley in West Yorkshire for Christmas. 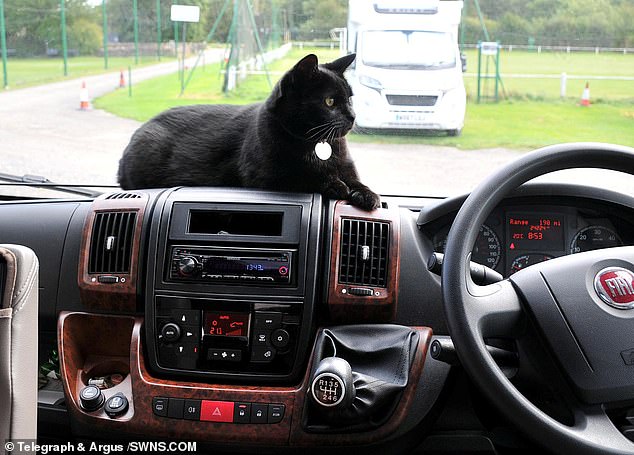 Noodles the cat, 10, has visited five different countries and stopped off at hundreds of locations with his owners Alex, 71, and Robert Crosland, 72, from Bingley, West Yorkshire 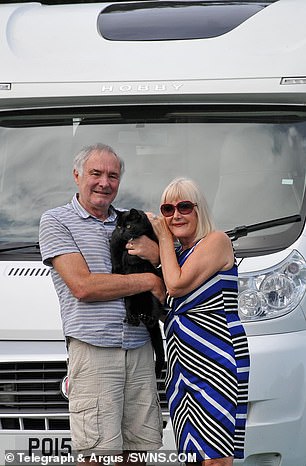 Ten-year-old Noodles has his own pet passport and gets jabs before heading overseas, where he is given free reign on the campsites.

Over the years he has visited five different countries, including Italy, Spain, Germany, France and England, and stopped off at hundreds of different locations.

Alex, 71, said: 'Noodles has been all over with us, he absolutely loves travelling.

'He's such an inquisitive cat so he loves exploring all the new places that we visit.

'When we first arrive somewhere he'll spend an hour or two under the van, getting used to the scent and sounds of the place, then he'll venture a bit further out.

'He seems to have a really great time while we're away.'

The retired researcher added: 'Everyone who bumps into Noodles loves him, they have to do a double-take though because they can't believe we have a cat on holiday.' 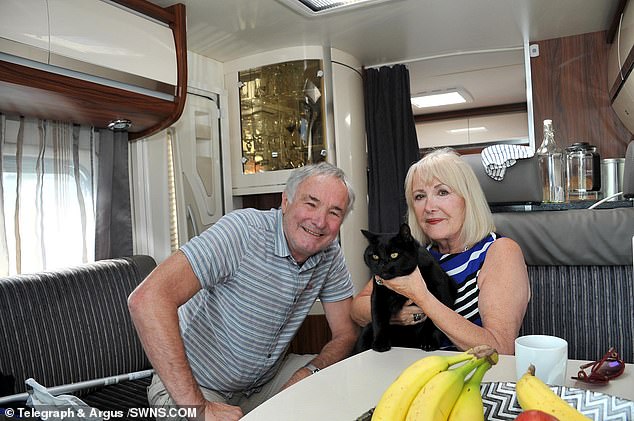 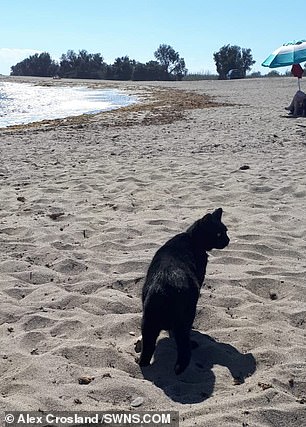 Noodles on the beach in Mojacar, Spain

He has also visited Monaco, Saint-Tropez, Zaragoza, Lourdes, the Pyrenees and all the Italian lakes over the years.

But the cat was left behind at their home in Bingley last winter when the couple travelled to Russia.

Alex said: 'We went to Russia but it was on a Baltic cruise so we had to leave Noodles behind with family.

'He was really grumpy because he knew we were setting off somewhere without him, I felt so guilty.

'He misses us when we're away and he's all over us when we return.'

The trio took their first trip abroad together when Noodles was a kitten and the couple moved to the Nouvelle-Aquitaine region in west-central France for a year.

Alex fondly remembers her precious puss chasing lizards and 'trying to pull of their tails.'

Since then he has been abroad with the couple, who have seven children and nine grandchildren between them, every single year.

'The camper van is a home from home for all three of us,' Alex said.

'Even when we're at home we often take him out in the car, he sits in his cat basket and looks out of the window.'

The couple's 30ft long Hobby Premium Drive camper van has a kitchen, dining area, double bedroom and shower, which allows them to live in it for months at a time.

'You can't beat the freedom of just setting off, we have everything we need in the van,' Alex said. 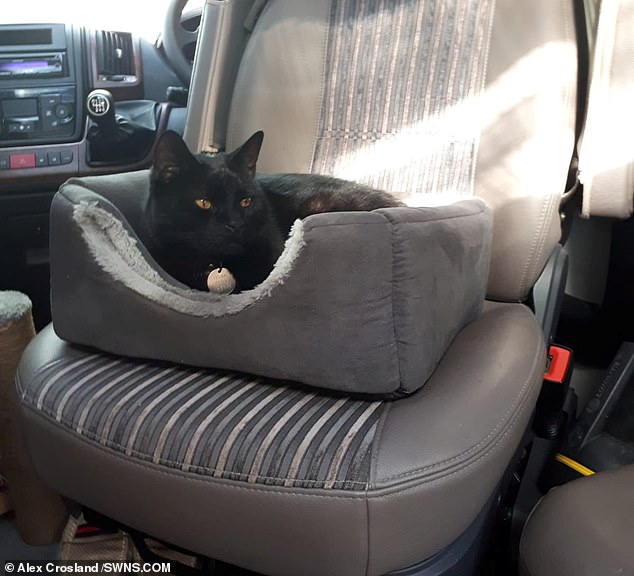 'If we pull up somewhere we always make sure one of us has hold of Noodles before we open the door.

'When we get to a campsite, we just park up and that's it. He hops onto the dashboard to take a look then, when he's ready, he's off to have a look around.'

Before embarking on a trip, Alex and Robert plan where to stay, always taking Noodles into account by plotting a cat-friendly route with appropriate camp sites.

The couple never stay in cities but sometimes stop at a site nearby and travel in, leaving Noodles curled up in his basket.

Alex said: 'We're very selective about where we stay, we choose places with plenty of trees so it's cool. We always park it in a quiet, shady spot, away from the road.

'When we go out Noodles is happy to stay in the camper van, we draw the curtains so he has shade, and open an air vent, and we never leave him too long.'

In dash radios for sale